Bruce Jones was a founding pioneer in the surfboard shaping industry.

The company he founded, Bruce Jones Surfboards, has built premium surfboards since 1973.

Bruce Jones had been surfing since the age of 15, and his love for the sport and interest in the art of building boards suggested to him that he pursue this as a career choice. It turned out to be a good decision.[1]
Jones started in the gluing room for Hobie Surfboards.

As the gluing room was right next to the shaping room, he had exposure to the finest shapers in the world at that time. Among them were Terry Martin, Ralph Parker, Dale Velzy and the legendary Phil Edwards. With some careful screening from Edwards, it was not long before Jones moved into shaping full-time.[1]
Jones worked his way into rough shaping and then into the actual shaping room and lost no time in getting help from everyone involved.[2]

In the mid to late 1960s, Jones moved to Huntington Beach, California, where he shaped for Vardeman Surfboards, doing all the Jackie Baxter Models, which to this day are considered rare collector's items, being the first board on the west coast to combine the low tail rails of the Hawaiian gun (for speed), with a refined longboard outline and eventually a turned down, flat-bottom nose for superb nose riding (influenced by the famous Morey/Pope John Peck Penetrator model).[2]
At night, he would shape for Gordie Surfboards. Gordie (Gordon Duane) had a reputation for being a superb craftsman but very hard to get along with. Jones put up with him and learned some of Gordie's shaping techniques and most of all his dedication to perfection through using these techniques. He did a short stint with Dick Brewer in 1969, ghost shaping for him on Maui. He then went on to shape for Russell Surfboards, Newport Beach, California, and then Ole Surfboards in Sunset Beach, California, from where he launched his own business. [2]
Also during this time (1970) Jones received a bachelor's degree in economics from California State University, Long Beach.[3]

He opened Bruce Jones Surfboards on September 15, 1973. In 1974, he moved the shaping and manufacturing portion of his business to Costa Mesa, California, where it remains today, albeit closed. In the mid-1980s, Jones demolished the old shop and built the new store, which officially opened January 1, 1986 [1] and closed in late December 2014.

To this day, the Bruce Jones Surf Shop in Sunset Beach stands as a testament to the vision that a true surf shop can survive, even amongst the giant surf mega stores that have more or less taken over the surf retail business. Put out a quality product and give friendly one-on-one service and it will flourish.[1]
Jones died on January 13, 2014 of a heart attack at the age of 68.[4] A paddle-out ceremony (friends and family sitting on surfboards in the ocean holding hands as a tribute) was held March 9, 2014.[5]

One of the things that I admire about Bruce is that he is one of the few shapers who can still create his boards totally by hand, without the use of the "shaping" machines that are in common use. He shapes all kinds of boards, from longboards to shortboards to big wave guns to "fish."[1]
"He is a master. And as long as I have known him, he has always remained a mellow and genuinely nice dude."[1]
"When he opened his shop (Bruce Jones Surfboards) on Pacific Coast Highway in Huntington Beach, it became an iconographic part of the surf scene...He was a laid-back, super-together guy, and the shop reflected his persona.” [6]

Bruce Jones classic vintage family special windsurfing board pro stock 9'3" This windsurfing board was made by Bruce for his brother-in-law, who sold it to me since he was too busy to windsurf. It was mint condition. It was only used a few times, so structurally in close to mint condition. There is some surface storage dirt from the Xtremline padded board bag that protected this board over the years until it had to be removed and trashed as the internal carbon was starting to flake off and dirty the board. Board is custom shaped by Bruce himself with the top of the line S2 Glass by Hexcell. The fin and mast slots are top of the line hard carbon which was very special for the time of production. Da Kine foot straps are still in very nice shape, just some time color fade as can be expected. Tail and head color stringers and head rubber protecter. Beautiful fiber glass color looks aqua marine. Beautiful board and a piece of surfing / windsurfing history from famous S.CA shaper Bruce Jones who later branched out to make extremely popular surf boards. Board is currently in Dallas TX as I moved from Huntington Beach in 2009. I believe it was made circa 1990. Not sure yet about shipping costs, I suspect a CA or FL board lover will want this classic board, so will work with you. Really belongs in a surfing / windsurfing museum. Thanks for looking, JoeSch at woodtennis dot com is the email for any questions. 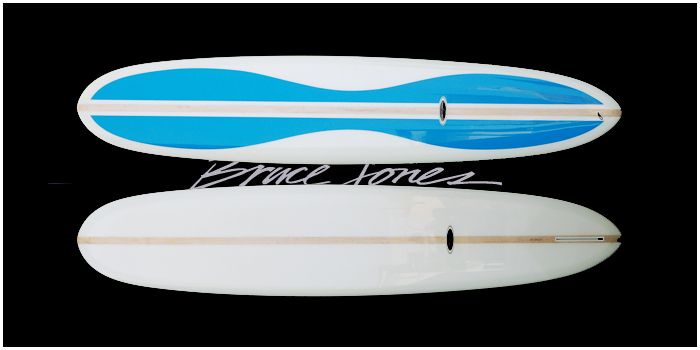 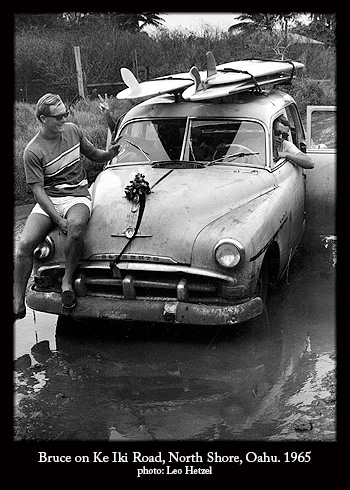 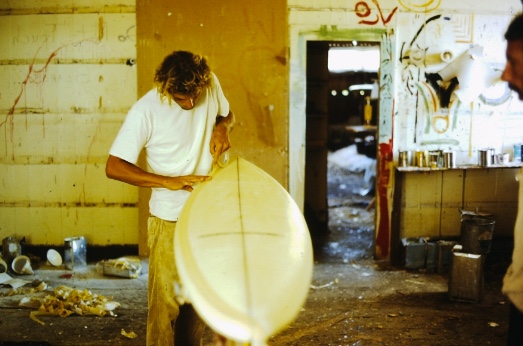 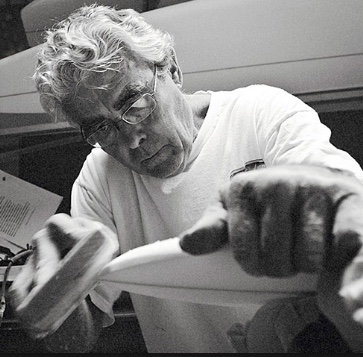